Het Zand was an area located near the village of Alphen which consisted of small rolling forested hills and heather. At the apex, 33 metres above NAP( the Dutch reference to height measured on land), the Germans built a wooden tower with a watchpost at the top. From this position two soldiers would continually guard and observe the skies around their position with binoculars. From their post the guards had a direct telephone connection with the airfield. With the arrival of Camp Bisam the watchpost became less important, but nevertheless the post was manned until the end of the war. After the war the tower remained in use for some time as a fire guardtower, but it was removed eventually. Today the area of Het Zand is a large a recreation area.

In the village of Rijen, in a wooded area between the railway line and the road from Tilburg to Breda in 1941 the Germans began with the construction of a 'Siedlung’, a kind of settlement. After the houses for this ‘Siedlung’ were finished they were mainly used by the women's section of the German Luftwaffe, the so-called ‘Luftwaffe-helferinnen’. These women, often volunteers to fill in the shortage in personnel, were appointed at the air traffic control, in nursing and as secretaries. They were also appointed in searchlight control units, Luftwaffe listening posts as radio operators, and even in anti-aircraft units on Flak batteries, the so called Flak waffe-helferinnen. Despite the fact that they did not belong to the armed forces they were committed to the military rules and discipline. The houses were usually reinforced buildings. After the hasty German retreat in 1944 many houses were destroyed by the Germans. A few houses are still there but the street called Kampstraat is now part of an ordinary neighbourhood. 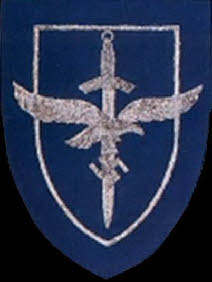 The daily need for bombs was not stored at the airfield but at a location in the woods situated along the road Vijfeikenweg in Rijen. The area, if coming from the airfield, was located three hundred metres past the railroad crossing to the left and right sides of the road. The area was surrounded by enhanced fencing and it was heavily guarded. The ammunition was simply stored on the ground in the slopes of the area. A bigger ammunition depot for storage of ammunition and bombs was located between the village’s of Loon op Zand and Kaatsheuvel. That ammunition depot was known as the M.A.St. (Munitions Ausgabe Stelle). The MASt served as a distribution point for the German Luftwaffe during 1942-1944. The complex was built in 1942 under the German leadership of Major Wagner and it consisted of many bunkers and buildings. The complex covered an area of 185 acres with fencing and multiple rows of barbed wire. It was located close to the Langstraat railway line which the Germans also used for the distribution. 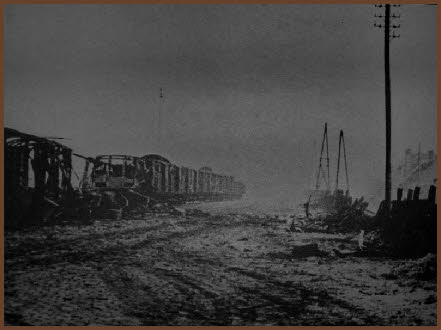 The storage location to both sides of the Vijfeikenweg in Rijen had a railway line that was connected to the line Tilburg-Breda. Daily truckloads were transported back and forth between these two ammunition depots to keep up with the daily needs of ammunition and bombs. The supply of ammunition and bombs from Germany was done by train. Regularly these ammunition trains suffered air attacks by the Allies. Also accidents happened involving the ammunition. Twice this happened at Rijen and inflicted a great deal of damage to the area around the Rijen train station. In the spring of 1942 for example, when  three train wagons loaded with ammunition blew up at midnight on 30 May, and a year later on 30 July when a German ammunition train was destroyed between a brick factory and a level crossing in Rijen. On 5 September 1944 when 'Dolle Dinsdag’ occurred, (‘Mad Tuesday’ - on this day many rumors were spreading in occupied Holland that the liberation by Allied forces was at hand) the Germans blew up the entire MASt complex at kaatsheuvel fearing that it would fall into enemy hands. That morning the Germans blew up the barracks and the storage of bombs and ammunition. The destruction was completed by Allied aerial bombardments by the end of the war.

A number of exploded boxcars of an ammunition train at Rijen

In 1944 the Germans began realising that because of the many Allied bombingraids on the airfield runways were often not useable and that there had to come an alternative. Therefore they started with the construction of an airstrip between Tilburg and Dongen in April of 1944. It was build near the banks of the Wilhelminacanal. This airstrip was necessary if aircraft, returning to Gilze-Rijen, couldn’t land because of damage to the runway’s and were forced to look for other landing grounds.

In the north-east corner of the airfield the Germans built a compass swinging base type ND 12/30 Ae. It was a circular platform with a diameter of 16,40 yards above a 10 feet deep brickwork pit housing and engine room. The platform had a wooden sled that could be attached under the tail of the aircraft to keep it exactly horizontal. After this personnel could turn the platform so that the compass deviations could be corrected. The concrete and brickwork pit with on the top a bronze ring with compass indications divided into degrees, minutes and seconds was the basis of the whole. The platform was entirely constructed from wood without the use of metal components. All connections, rotating and moving parts were made of copper, brass or bronze. This was done deliberately because metal parts were the subject of derogations to the compass. By rotating the platform with an airplane on top the compass onboard the aircraft was precisely adjusted by using the bronze ring with degrees, minutes and seconds. The Germans had such a device on multiple airfields around Europe. Because this device is the only remaining one in the world, the others were removed or destroyed, its rather unique. Due to the fact the brickwork pit under the platform was full of water over the past 65 years the woodwork is well preserved and still in good condition. The ‘Gradzahlenschilder’ are still there; two rows of numbers for ‘Kompensieren’ (calibrating the aircraft compass) and ‘Funkbeschicken’ (calibrating the aircraft radio compass). The entire construction is today considered as a monument and as such registered as military heritage. 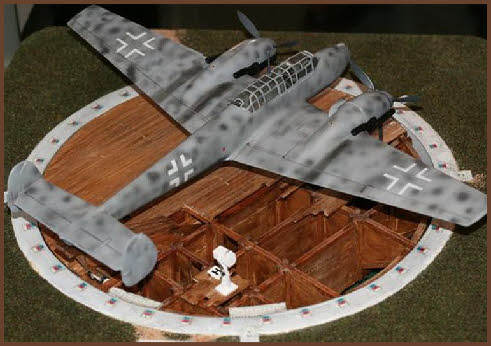 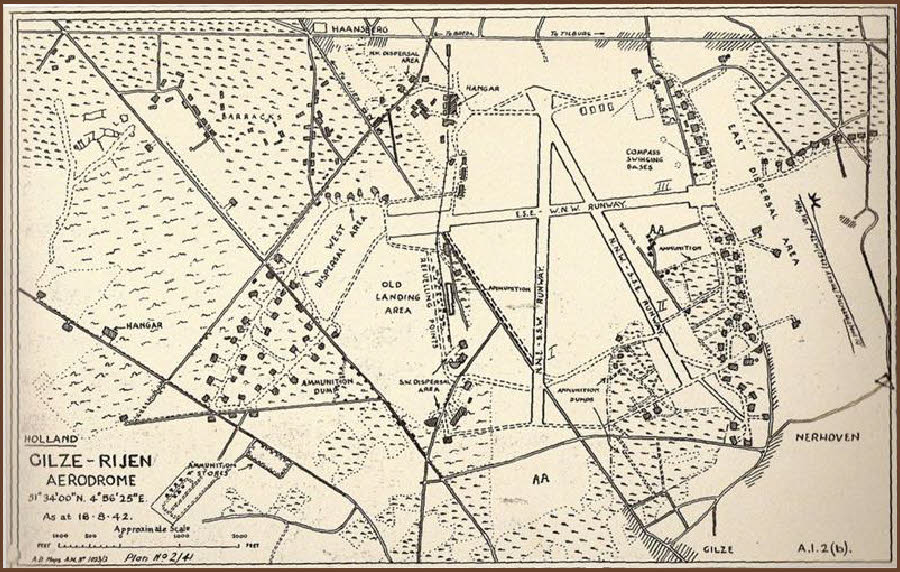 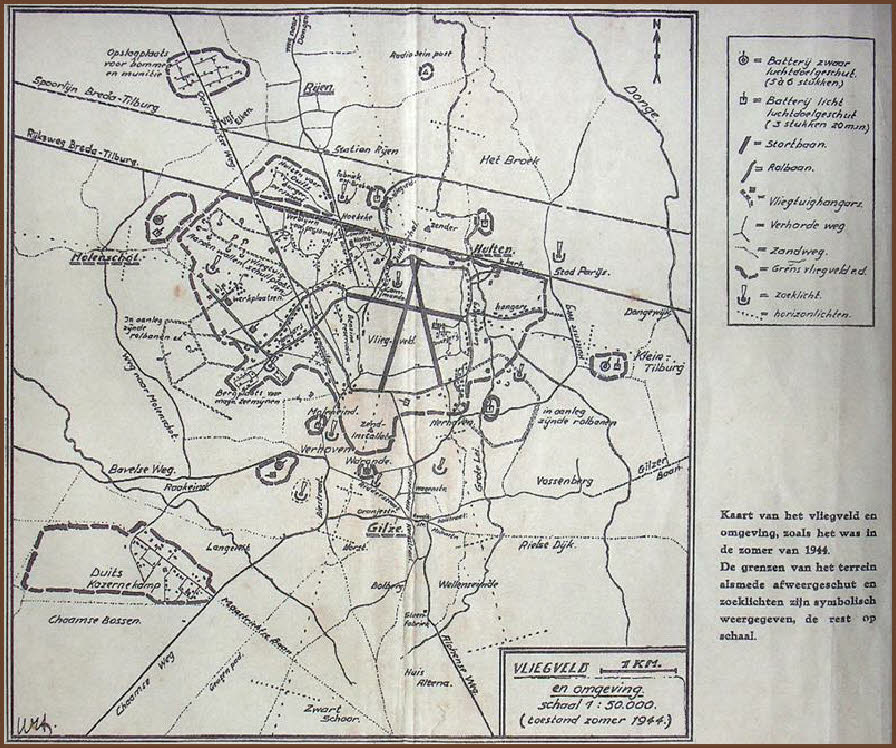 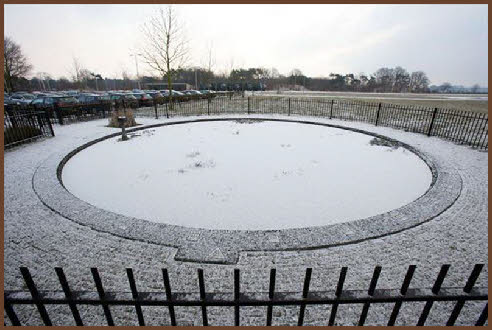 The current situation of the monument, compass swinging base.